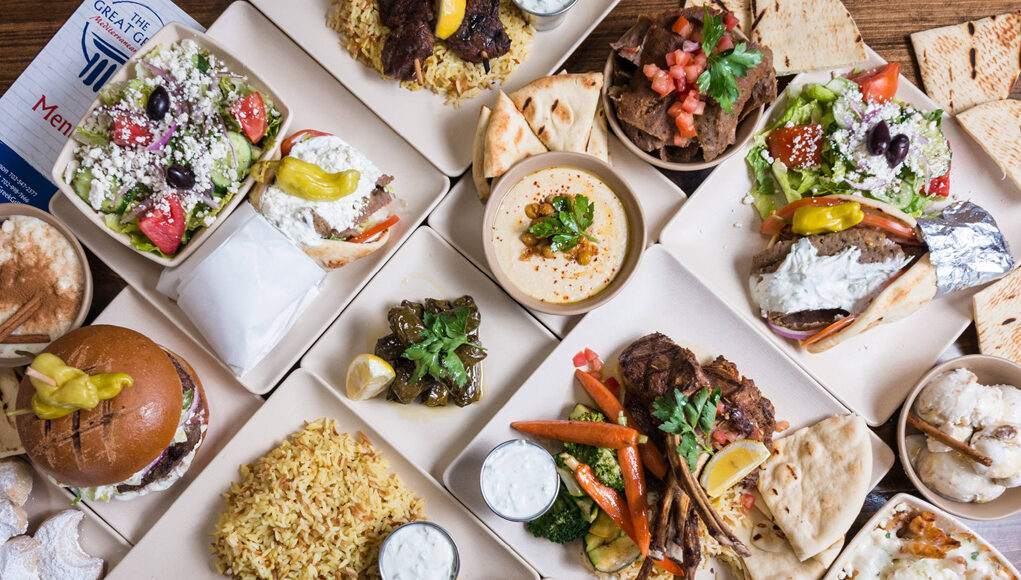 did you know that we have a new Greek restaurant in town? The doors are open now at The Great Greek Mediterranean Grill located in The Grandscape Development, 3750 Plano Pkwy. Franchise owner Derrick Udy has brought the legendary tastes of the award-winning fast-casual restaurant to the ‘City By The Lake,’ a city that is definitely receptive of new, international eateries. In fact, this is the first one in the Lone Star State, with the almost certainty of more to come. “Today marks the first day of The Great Greek in The Colony,” said Derrick Udy. “This is an exciting new era of fresh, delicious, relaxed dining that we’re certain everyone will love.”

One of the advantages of small town life is that news-especially when it concerns new eateries, travel fast. And when my BFF told me about the new ‘Greek’ restaurant in town, I knew right then, I had to find a reason to go over to Grandscape for some light shopping, and since I’ll literally be right next to it, I should naturally go in and try the Spanakopita.

I refrained from eating an entree as I really couldn’t justify to my husband why I had dined out without him, but an appetizer on the other hand, is merely a ‘snack’ to hold me until dinner. Surely there’s nothing wrong with a little Greek snack to curb the midday hunger pangs, right?

And since I’m having the Spanakopita, it just seemed natural to order at least one more appetizer, which by definition really isn’t a meal yet, per se. So, I might as well have the Tirokafteri. So I placed my order, grabbed a free flavored water and grabbed a seat. I like the fact that their dishes are made fresh daily, and you know this as soon as you take a nibble on the warm pita. Super fresh and grilled ever-so-lightly.

Tirokafteri loosely translates into spicy Greek cheese spread. Eric Goldner, the General Manager said that their recipe calls for “feta cheese, habanero, serrano and jalapeno peppers, and a mellow undertone of olive oil.” It has a spicy (but not hot, as we call it in Texas), salty taste, light and airy and quite tasty! “The heat doesn’t linger, as the small amount of dairy keeps it in check, said Goldner.” And he was right, it’s not overwhelming, but the mixture of three different peppers adds the perfect ‘trifecta’ that this appetizer demands. Needless to say, it was consumed quickly, but efficiently. Now, on to the Spanakopita. 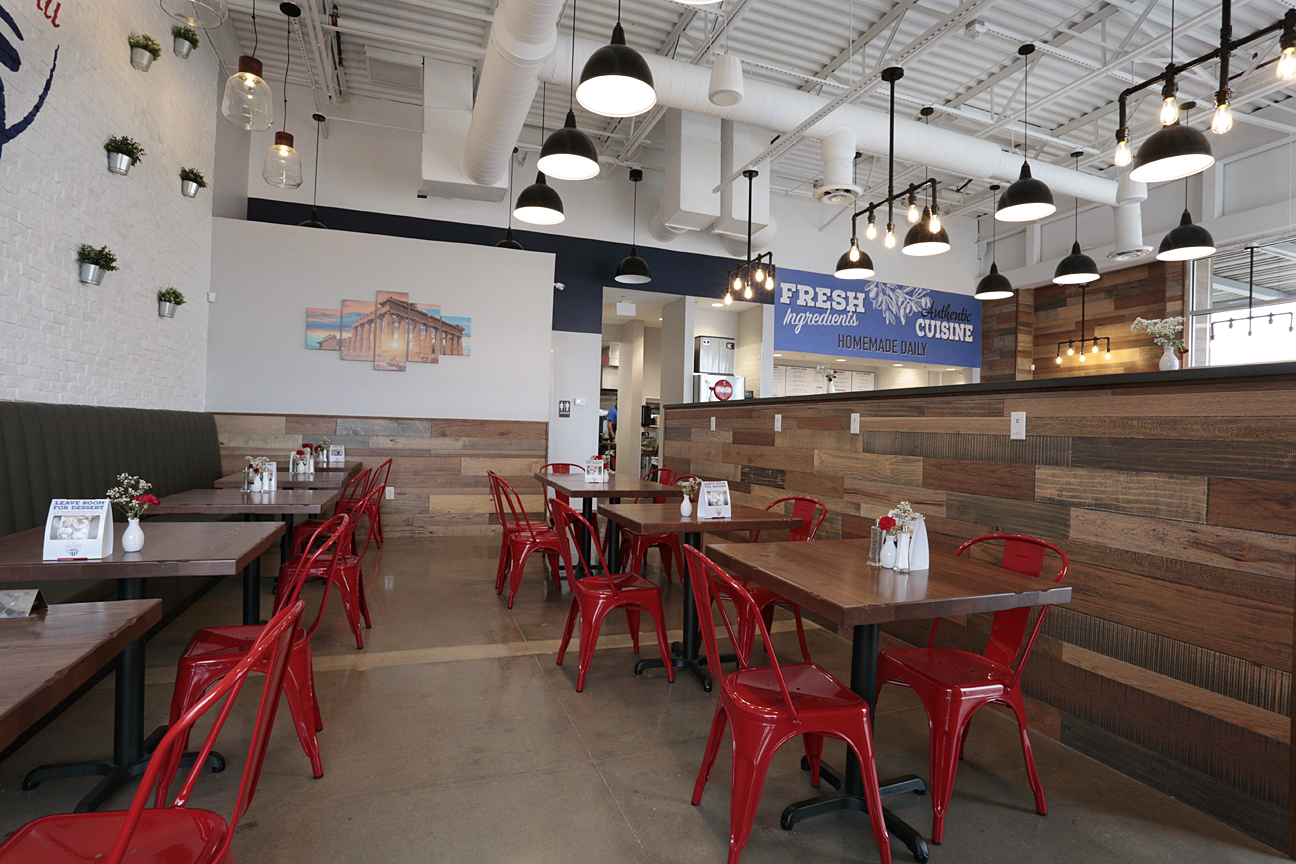 Spanakopita is a traditional Greek pastry, a dish you’ll find in literally every Greek restaurant, and internationally as well. The restaurant serves it as a triangular pastry, stuffed with fresh feta, spinach and leeks, layered in phyllo that is super thin, and super delectable. The flavor is subtle and not overwhelming, but quite filling.

…we buy the freshest products, prepared daily, and our team members at every location are committed to providing great guest service.

The Colony is the latest in a flurry of developments for The Great Greek, which has either opened or broken ground on new restaurants in Nevada, Colorado, Texas, and South Florida over the past year. “Very few concepts offer the same level of quality, made-to-order preparation, table-side hospitality, speed of service, contemporary atmosphere, and value as The Great Greek,” said Jim Butler, President of the Food Division at United Franchise Group. “When you combine all that with the zesty, savory flavor profile of the Mediterranean that is The Great Greek’s specialty, it’s no wonder the brand is taking off the way it has nationwide. There’s a lot to look forward to in The Colony.

Four-time “Best of Las Vegas” award winner, The Great Greek menu is sure to have something for everyone in your family. You’ll want to experience the original, classic flavors of the Mediterranean as they are created daily from classic family recipes with fresh, authentic ingredients. Whether it’s a savory skewer from the grill, a crisp refreshing salad or wrap, a palate-pleasing appetizer, a tender gyro, dessert or more, The Great Greek is a contemporary take on timeless cuisine.

“The Great Greek is a contemporary take on timeless cuisine.”

“My father is a retired Veteran, who was stationed in Germany while I was young. While there, my parents visited Greece and fell in love with the food and culture. You will likely find my parents at our restaurant whenever they are in town. I am proud of all who serve this country.” Said Derrick Udy. “When we were deciding on which business to open, I knew right away this was the one we wanted and all 5 of our girls were excited about the restaurant over any other of the options we had considered. You will likely see some of our daughters working at the restaurant throughout the week”, said Mrs. Udy.“ 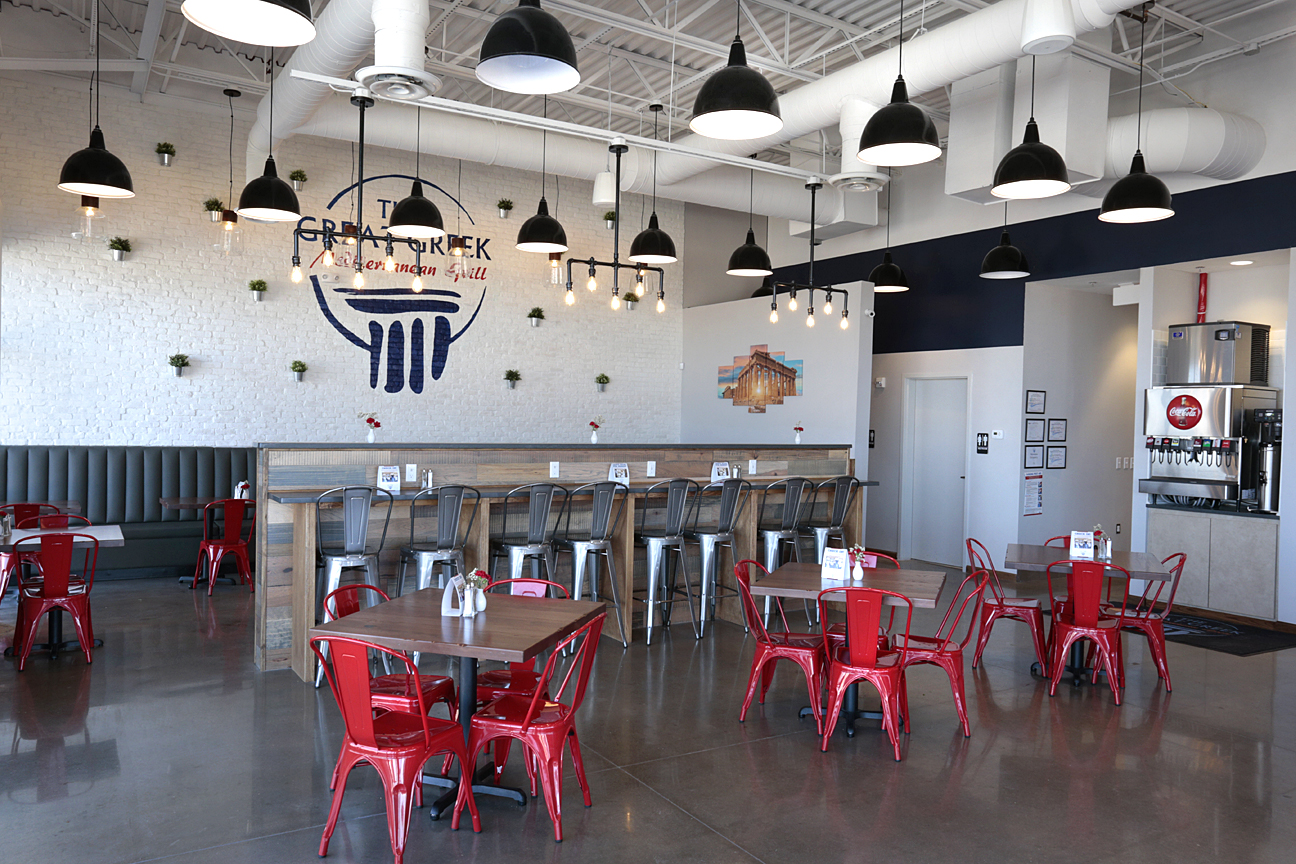 The rapid growth of The Great Greek indicates our popularity among guests and their demand for great-tasting, high-quality food choices,” says Nick A. Della Penna, co-founder of The Great Greek. “The ingredients that have made us a success are that we buy the freshest products, prepare daily, and our team members at every location are committed to providing great guest service.”

construction began in December and was completed in March, and they had their soft-opening on March 6, 2019. The restaurant has 2,210 sq feet of space, capable of serving up to 49 guests at a time, as well as an outdoor patio area that can accommodate 32.The official ‘Grand Opening’ will be on Tuesday, March 26, 2019. Take-out is available and they’ve partnered initially with Door Dash and Uber Eats for delivery and will offer catering probably beginning as early as April.

Grandscape is one of the largest and most unique mixed-use real estate developments in the country located in the heart of Dallas/Fort Worth, the 4th largest metropolitan area in the nation. The sprawling 400+ acre development features 3.9 million square feet of retail, entertainment, dining, hospitality, office and attractions. Grandscape is being developed by Nebraska Furniture Mart, a Berkshire Hathaway company and the developments first anchor. The home furnishings giant opened their 1.86 million square foot store in May 2015. With more than a dozen more restaurants and retailers debuting this year, and even more slated for 2020; The Colony is developing into one of the most sought-after growth destinations in the country.

One thing that impressed me, was that the employees were very friendly and quite knowledgeable of all the Greek dishes, and enunciated the Greek menu fluently! Which I was having obvious difficulty with. There were 8 employees behind the counter and in the kitchen, and they were quite expedient in preparing and serving my apps. And yes, my next trip here will be with the hubbs, and number one priority for my entree, what else; will be the Great Greek Gyro, and maybe just one appetizer.