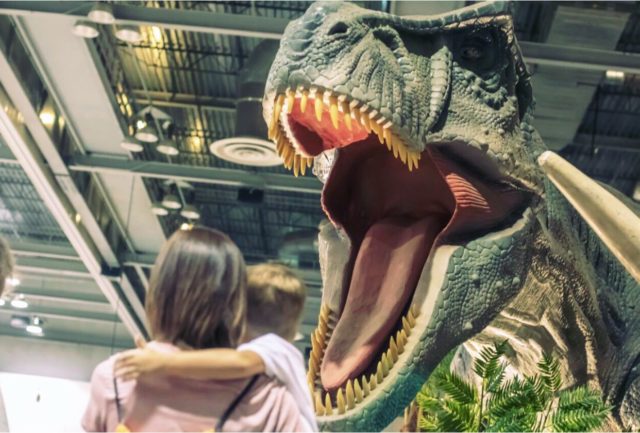 the Dinosaurs are finally coming to Dallas, and it’s called Jurassic Quest. Arriving at Fair Park, the exhibit will run January 18-21, 2019. Jurassic Quest has been the largest and most realistic dinosaur event in North America since 2013 and is now EVEN BIGGER. Guests will walk through the Cretaceous period, the Jurassic Period and The Triassic period and experience for themselves what it was like to be among living, breathing dinosaurs. Jurassic Quest has adolescent dinos that walk around and play with the guests. Just like when they were babies, they love to put smiles on families faces and with their bigger size, maybe startling them a little too. This is another dinosaur fan favorite that can only be seen at Jurassic Quest Events. Once visitors have experienced the Dinosaur Exhibit, they’re not finished yet… There are many attractions and activities for all kinds of dinosaur fans. Guests can dig up fossils like a real paleontologist, They can Ride on the back of a Huge 24ft TRex, or the spiky, Overgrown, Carnotaurus. There are several different species to ride and the guests always seem to find their favorite.

There are countless dinosaur themed rides through out the event… Inflatable mazes, HUGE slides, and the multi-track Dino Bungee Pull. Jurassic Quest has a Dinosaur Petting zoo where little ones can pet dinosaurs that are more their size and take photos. You can do crafts with the kiddos, Dino Science stations, visit the fossil area in the Dinosaur Museum and see real dinosaur fossils dating back over 60 million years. Whether they are big or small, all of the guests have a ball.

Strollers are welcome and be sure to bring your cameras!

In Jurassic Quests Dinosaur World, the dinosaurs roar and move, some even walk around. At a Jurassic Quest event, there’s a sometimes-blurry line between the visitors watching the dinosaurs… And the dinosaurs watching them. The interactive baby dinosaurs are always a big hit and another feature that can only be seen at Jurassic Quest events. The Baby Dinosaurs love to see and play with our guests. They’ve been known to grab baseball caps right off of unsuspecting children’s heads, nibble at their shirts and even pose for pictures.Turns out, even when they grow up a little, they still love the attention. They’ve recently added more dinosaurs and elements that have never been seen before, like the HUGE, NEW 24 ft. Carnotaurus & T-Rex rides! The LARGEST ride-able dinosaurs in North America! Strollers are welcome and be sure to bring your cameras! There will be a TON of great moments to capture! ALSO, DON’T FORGET TO BRING SOCKS! Socks are required for the inflatables!

CLICK THE LINK BELOW TO FIND TICKET PRICES AND PURCHASE TICKETS ONLINE:
https://www.jurassicquest.com/events/dallas-tx

Purchasing tickets online before the event will GUARANTEE ACCESS!